Docker is a tool that allows developers to quickly create, deploy, and run applications using containers. The concept of containerization is an approach in which the application, its dependencies and configuration are all packaged in one file known as a container.

Containers are somewhat similar to Virtual Machines, but instead of running the entire OS and all its services, they only run the minimum required by software that is packaged as a container and depends on the host OS for the most part. This container has better performance than running a complete Instance and is isolated from the host OS environment.

In this article, let’s look at how to install Docker and enable Hyper-V and WSL to run containers on Windows 10.

You need Windows 10 64-bit Pro, Enterprise or Education edition with 1703 updates or newer (build 15063 or newer) to use Hyper-V backend or Windows 10 64-bit with 2004 or newer updates (build 19041 or newer ) for the WSL backend. In addition, a modern 64-bit processor is needed with virtualization support and a minimum of 4GB RAM.

In addition to the requirements above, you need virtualization support that is enabled in the BIOS. To check whether you have activated virtualization, open Task Manager and open the Performance tab. 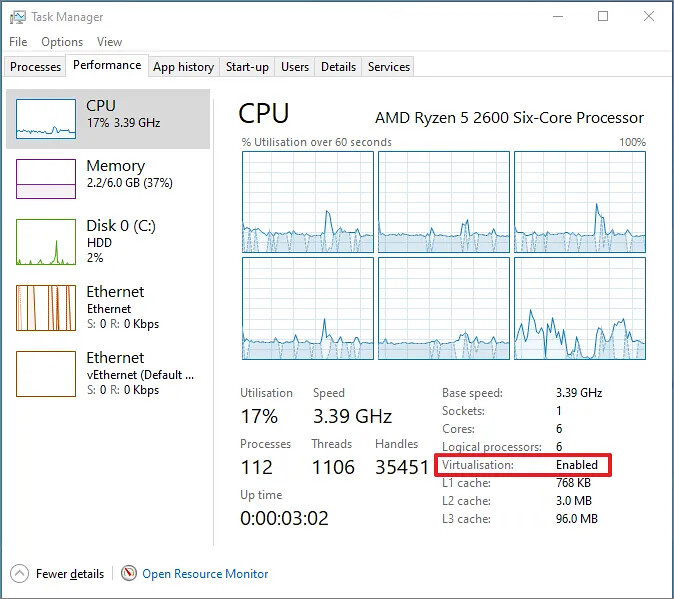 If virtualization is displayed as ‘Disabled’, you must enable it in the BIOS settings. Depending on the motherboard and CPU you have, the steps to enable virtualization are different.

Docker is available in the Winget repository, so it can be installed using a simple command. If you have not installed the winget tool and want to learn more.

We will install the stable release of Docker available in the Winget repository. Open PowerShell or CMD and run the following command to install it. 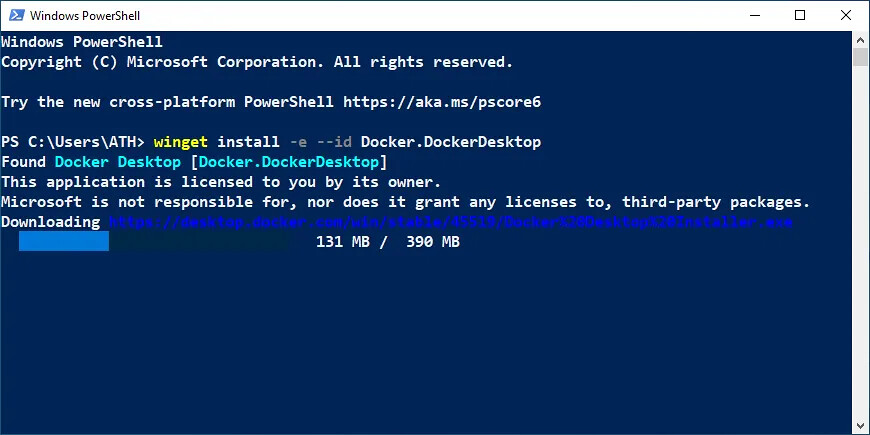 The UAC prompt will ask permission to make changes, click ‘yes’ to continue installing Docker Desktop. Soon Docker will be installed on your system.

But we can’t yet run Docker, before doing so we have to activate Hyper-V or WSL for Windows 10 or Docker will throw an error and won’t start. We will discuss this later in this guide.

Then, open your download folder and double click on the ‘Docker Desktop Installer’ setup file to start the installation process. 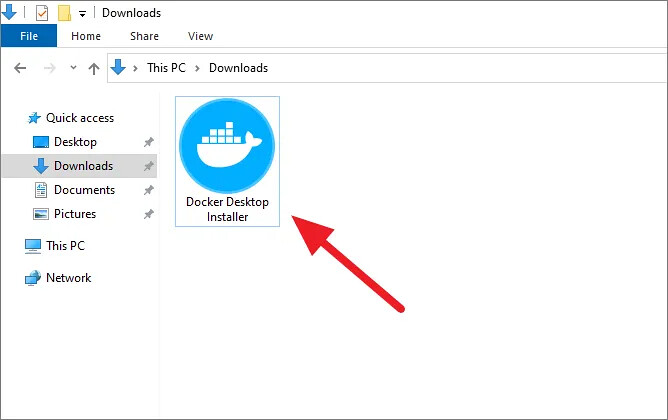 You will be presented with a configuration window in the setup process. Check Enable Windows WSL 2 Feature ‘if you are using Windows 10 Home edition or want to use the WSL 2 Docker backend and Check’ Add shortcut to desktop ‘if you want the Docker Desktop shortcut, then press’ OK’ to start the installation. 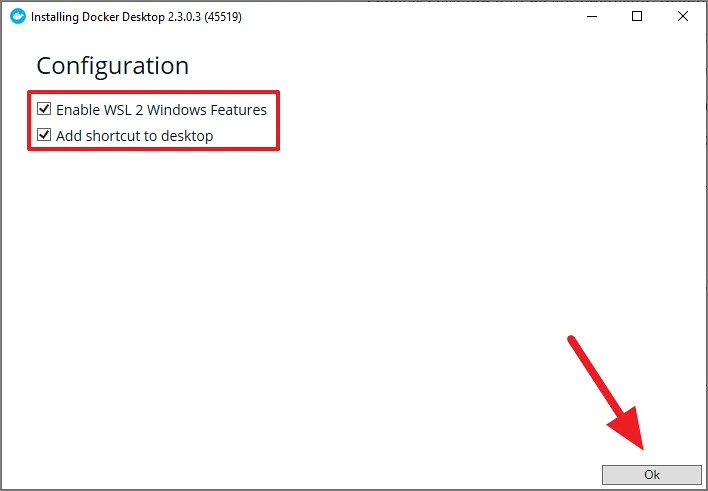 After the Docker Desktop settings finish uninstalling and installing the file, click the ‘Close and restart’ button to complete the docker installation process. 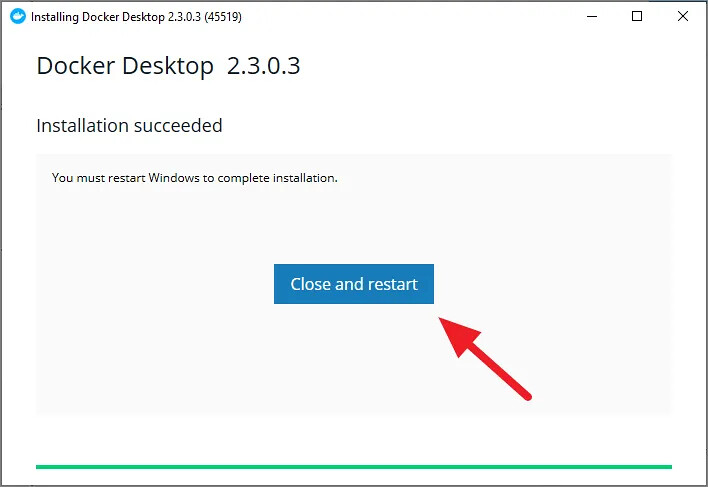 Now all that’s left is to enable Hyper-V or WSL depending on the Windows 10 edition and version you have.

Hyper-V is the original hypervisor for Windows 10 that can be used to create and run virtual machines. Hyper-V is on the route to become a legacy option for running containers in Windows 10, because docker plans to use WSL as its main backend to run containers.

But you still need Hyper-V if you want to run the original Windows Docker container. Thus to activate Hyper-V, open PowerShell as an administrator and run the following command: 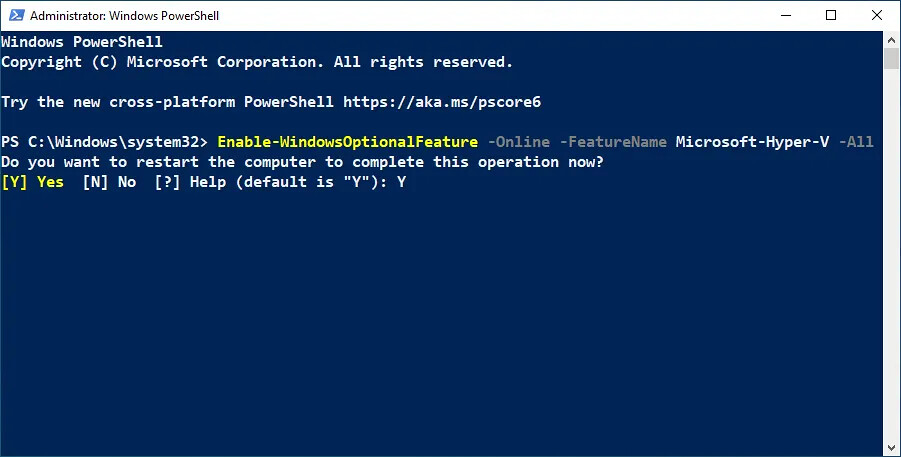 PowerShell will ask you to restart the computer to complete the Hyper-V installation, type Y and press enter to do the same. After rebooting the computer, you can run Docker Desktop and use the container.

If you have the latest Windows 10 2004 update, it is recommended to use WSL as a Docker backend because it performs better than the Hyper-V backend. Windows 10 Home edition users have no choice but to use the WSL backend for Docker because the Home edition does not have a Hyper-V feature.

If you have checked ‘Enable Windows WSL 2 Features’ in the settings, this command can be skipped because the Docker Settings automatically activates WSL. Go to the ‘WSL Update’ section below to continue the process.

Open PowerShell as an administrator then run the following command to activate the WSL and WSL components “Virtual Machine Platform” for Windows 10.

Press ‘Y‘ and press enter to restart the computer and complete the process. 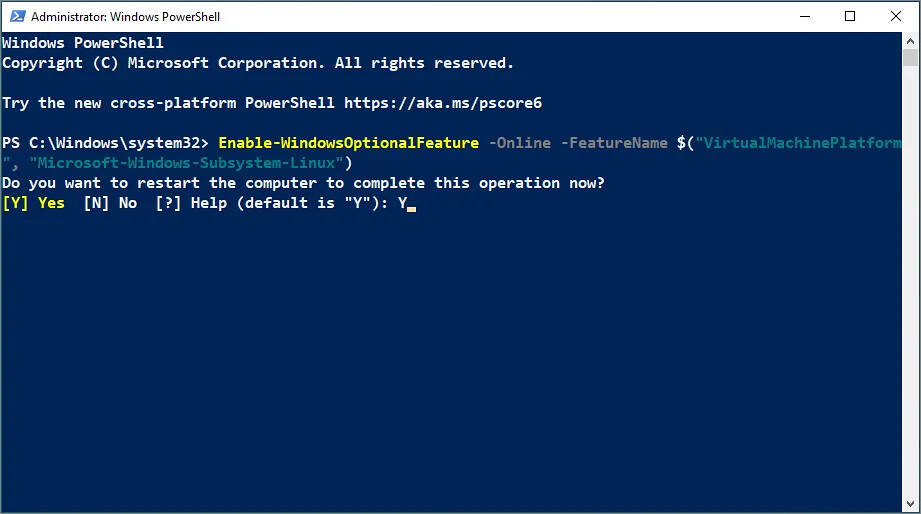 After you complete the Docker Installation and restart the system, when you run Desktop Docker you will see an error as shown below. 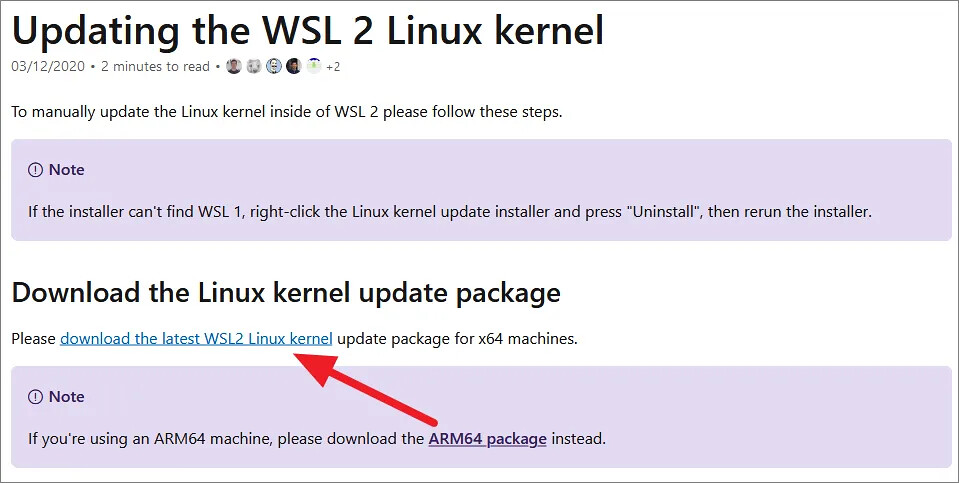 Double click on the settings file you downloaded in the steps above and press ‘yes’ when asked for permission. 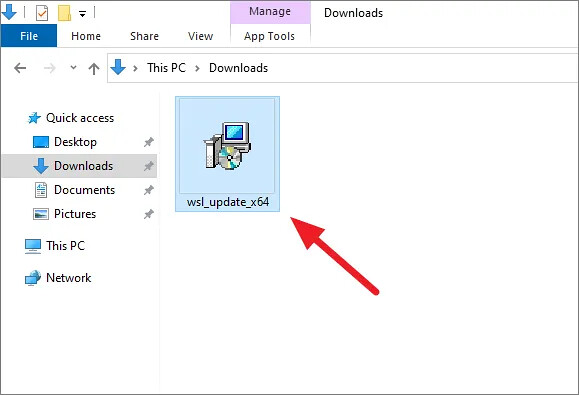 After you activate and update WSL for Windows 10, you can run Docker to find it in the Start menu. 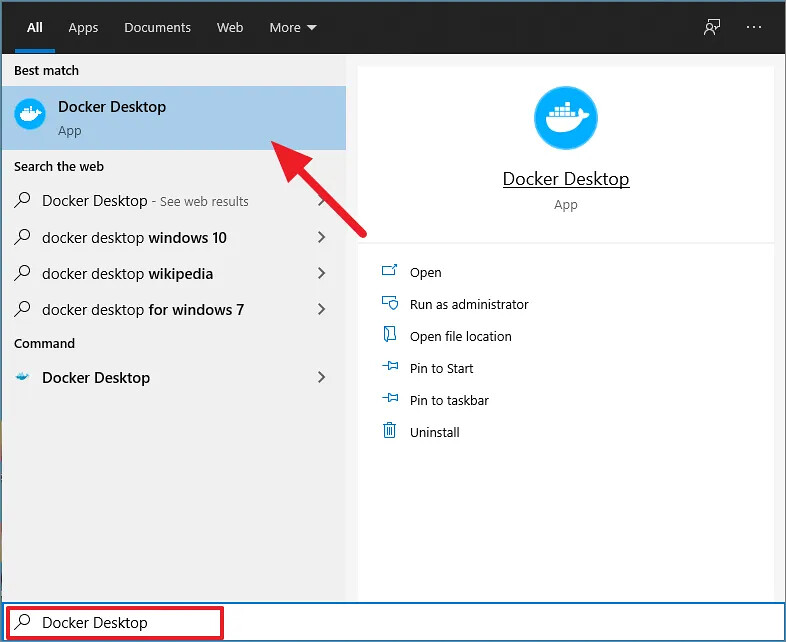 If you have activated Hyper-V & WSL, you can use the backend and switch between the two to use Windows Containers or Linux Containers. 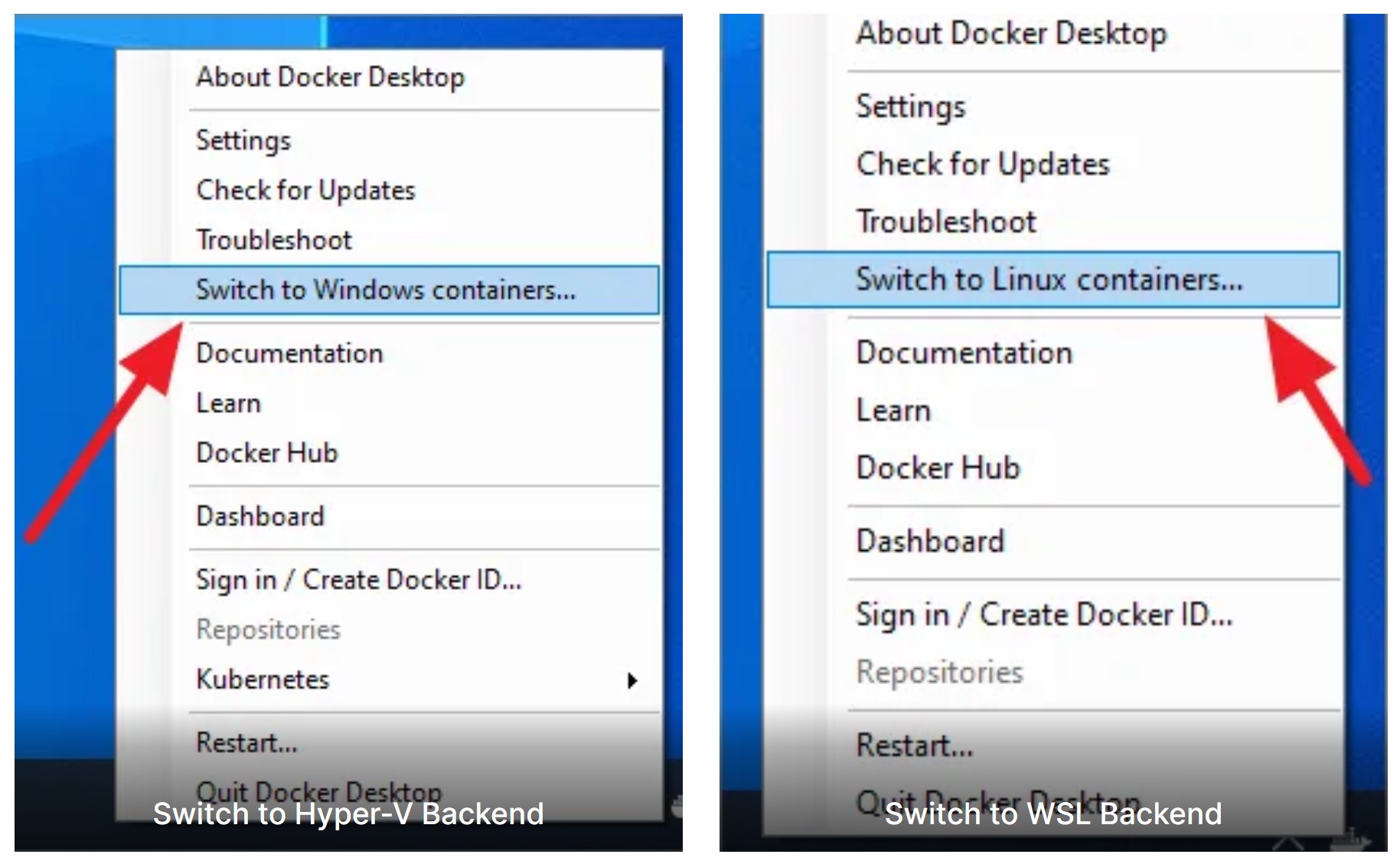 The white whale in the system tray shows that Docker is running. But you can also test the docker installation by opening PowerShell or CMD and typing the docker version 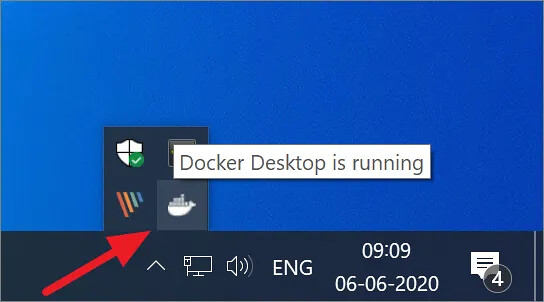 This message shows that our Docker installation was successful and we are ready to draw images and make containers. 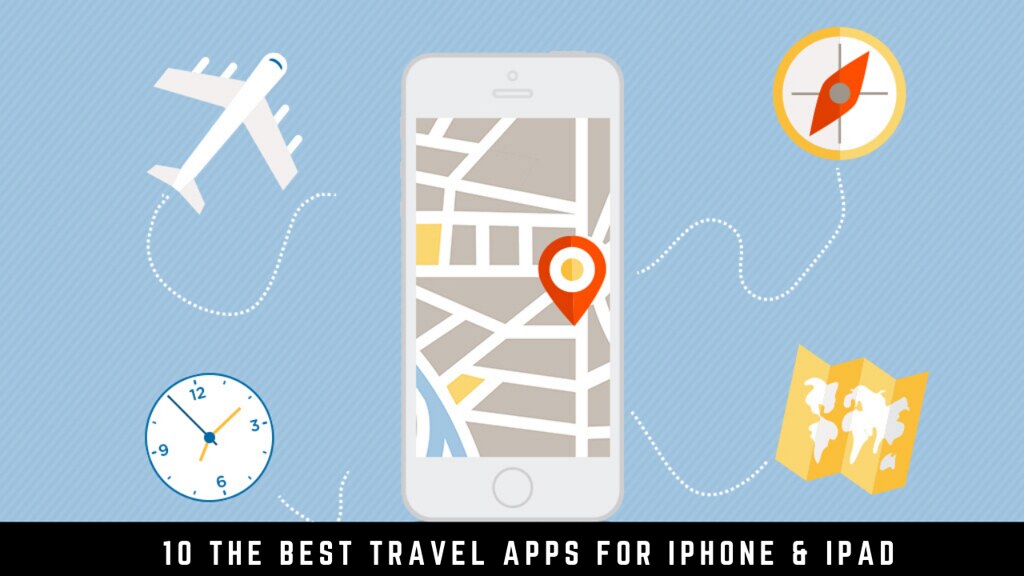 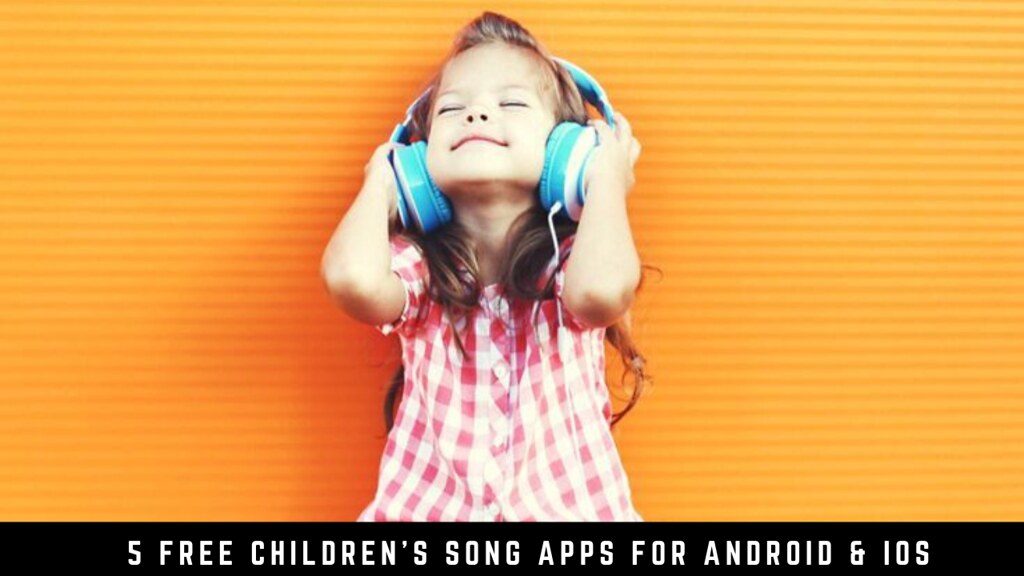 How to Setup and Configure Multiple Monitors on Windows 10

How to clean Windows

How to Install iPhone Notes Apps on Windows 10

How to Open Registry Editor in Windows 10

How To Set Parental Controls On Xbox, Windows 10 And Android

How to Activate and Use Clipboard History in Windows 10

How to Install PostgreSQL and phpPgAdmin on Ubuntu 20.04 LTS

How the New Apps Library Works on the iPhone

How to Edit Many Reminders at Once...

How to make Namespaces in Kubernetes

How to turn off the video of...

How to Mirror Your iPhone to a...

How to see weather forecasts on your...

How to Install a Plex Media Server...

How to Install OpenCV on Ubuntu 20.04

How to Add Launchpad to the Dock...

How to Create a Folder and Organize...

How to Permanently Delete Files from the...